Chumbawamba always had a love/hate relationship with Elvis.

We adored the early Elvis, loved his rawness, the visceral performances, the outrage and his undoubted beauty. Watching those early performances of him, before he had all the edges knocked off him is still an absolute treat. Before he was re-packaged, sanitised and branded and before he sounded the death knell of rock & roll when he joined the army.

For a while in the early 90s we played behind a banner of what can only be described as the Fat Las Vegas Elvis; bloated on a destructive cocktail of burgers and success and excess. It was an anathema; we thought it defined everything that was wrong with the rock & roll machine and so the banner had a huge rip right down the centre as if we were saying No, we dont want this! We didnt. We wanted sex and danger and rebellion and rock & roll. 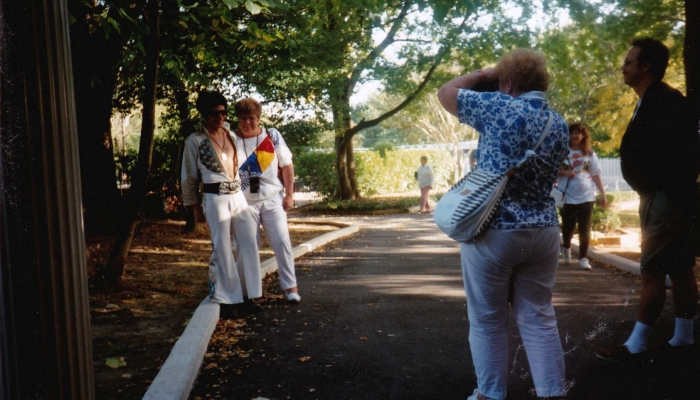 Poor Elvis; a victim of his own success, his own power to really move and captivate people. He never stood a chance. But if that young Elvis was on BBCs The Voice now judges would describe him as real; a word that has completely lost its meaning in todays world. For a while Elvis was real. Authentic. Inspiring. Dirty. But that was way back then

Elvis died slap bang in the middle of the Great Punk Jihad so there was absolutely no way we were going to mourn his passing and yet 15 years later we found ourselves in the midst of a grueling USA coast-to-coast tour mourning the loss of Elvis by his graveside at Gracelands, Memphis, Tennessee. More bizarre than our pathetic attempt to re-enact the Spinal Tap Elvis gravestone scene was the fact that Danbert Nobacon was dressed in his home made Elvis one piece costume. Normally reserved for our live performance of a song called Ulrike about the German Baader-Meinhof member. The song was a statement on how dead people are re-invented, repackaged and reclaimed by scurrilous opportunists to further their own careers. To further illustrate this point Danbert performed as Elvis half way through the song half-homage, half pantomime. We thought it was only appropriate that Danbert should come properly attired. Our fellow sightseers were amused/bemused by the spectacle until that is, bored of waiting for the bus to drive us the 50 yards out of the grounds and exasperated by the petty bureaucracy Elvis made a run for it. Sprinting across the manicured lawn with 3 security guards in hot pursuit this still remains one of my favourite images of all time. 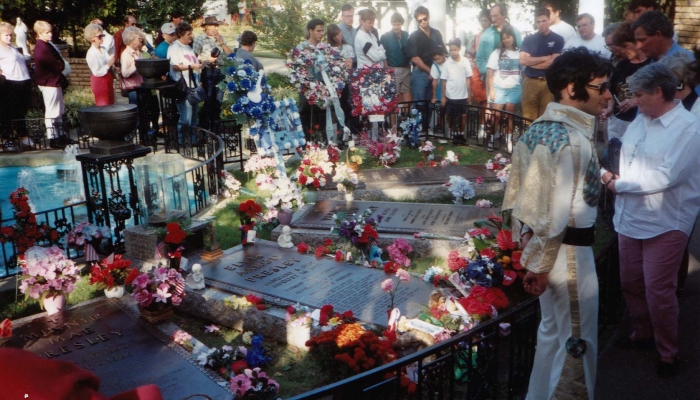 Elvis has escaped! an old lady declared. We howled with laughter as Danbert, a keen and spritely runner evaded capture until he reached those famous gates where he was detained and told he was banned from Gracelands for life and was not even allowed to stand on Elvis Presley Boulevard the road on which Gracelands is to be found. Danbert had surpassed himself once again.

Why am I telling you all this? Well probably because I still believe that Elvis has the power to make you do the strangest of things. Who hasnt tried to do that famous Elvis hip swivel? Who hasnt attempted that upper lip snarl? Who hasnt as a whole family attended a friends wedding all dressed as Elvis [we have]. Who hasnt drooled over photos of the young Elvis?

To be honest when Jeanie told me about Orion I had never heard of him. I must have been too deeply involved in the Punk Wars to have noticed but I was totally fascinated, intrigued and jealous that Jeanie had found this amazing story thanks to a random car boot sale purchase.

Its a story that really doesnt surprise me I suppose; nothing connected with Elvis really would, but crikey, do I want to hear that story be told?! In some ways I wish I didnt even know that Jeanie was making this film so desperate and impatient am I to see the finished film. I know that Jeanies a massive, massive fan so I know the film is in safe hands; I just hope this film gets finished sooner rather than later because its going to be an absolute treasure